On the 9th December a group of pupils from the John Warner School had the exciting opportunity to take part in a visit to our brand new partner school, The Anton Philipp Reclam Gymnasium in Leipzig, to work with a small group of German pupils on a robotics challenge ending in a friendly competition to see who had best been able to programme a small robot. Included in the visit was some all-important sight -seeing and shopping at the beautiful Christmas market. Part of the focus for the project was to enthuse a number of girls to get involved in engineering and therefore the trip was opened up to a selected group of year 8 and 12 students who had previously been involved in various engineering projects including the Rotary Technology Tournament, the First Lego League and VEX robotics through the East Barnet school consortium, supported by the Royal academy of engineers. The trip was also a useful tool to add gravitas to a number of grant and sponsorship applications including the Imeche who recently funded a girls in engineering project by granting £1000 to the School. The second focus for the trip was an award to the year 9 students who last year achieved World Final qualification by winning the UK Excellence award in VEX robotics. Due to unforeseen circumstances, the students were unable to attend the finals (in Anaheim USA) and were therefore invited to attend this trip as a reward for their hard work and achievement.

Our objectives on the trip fell into a number of categories;

• Cultural; to show students how German schools operate and to give them an insight into the level of engineering and computing that German students receive. As Germany is still considered a world leader in this area, it was a worthwhile experience for our students to make the comparison in the education they receive. By the end of the trip, our students considered that they were receiving a much better and deeper experience in engineering and computing than before the trip.

• Partnership; part of our goal is to share the experience that our students have had. As I believe that they have had a enriched experience it should be their duty to share this wherever possible to develop a culture of working together with other engineers. As no engineering project can be completed without collaboration, this is also a valuable lesson for our students. It is very likely that at some point in their engineering life they will be required to work with engineers from other countries as we are all now part of a global market.

• Challenge; our students have a competitive nature. Most developments are created under pressure of one kind or another. The spirit of competition allows students to develop skills in a safe but challenging environment whilst given them an arena in which to excel. Life experiences will be judged against others achievements and we are giving our students a framework in which to thrive.

On the first day, the pupils settled into their rooms before looking around the Christmas market. The markets were full of aromas. They were very festive for the season’s greetings. They enjoyed delicacies such as traditional crepes and other traditional German food. The Christmas markets are well beyond any that the students had seen in the UK and the whole outside nature of the festivities demonstrated the difference in culture between our two nations.

The second day was an early start and the students spent the first part of the morning having a tour around the Anton Philipp Reclam School. The tour was conducted by a student who was fluent in French and who claimed to have limited English skills; her English was, however, excellent. The second part of the morning was time for the German robotics group to demonstrate what they had achieved with the Kit kindly donated by Paul McKnight and ourselves. Having built a working robot since we last met, they required a little assistance with some of the technical aspect of the programming which our students were more than happy to help with. After this we accepted a driver challenge where all students worked in teams to move objects around a pre-designed course. Our students demonstrated a great team spirit and collaborative ethic which the German students were soon emulating. The challenge was undertaken in good spirit and friendships began to form between the groups. After this, the group spent some time in lessons with the German students before heading into the school canteen to share lunch. 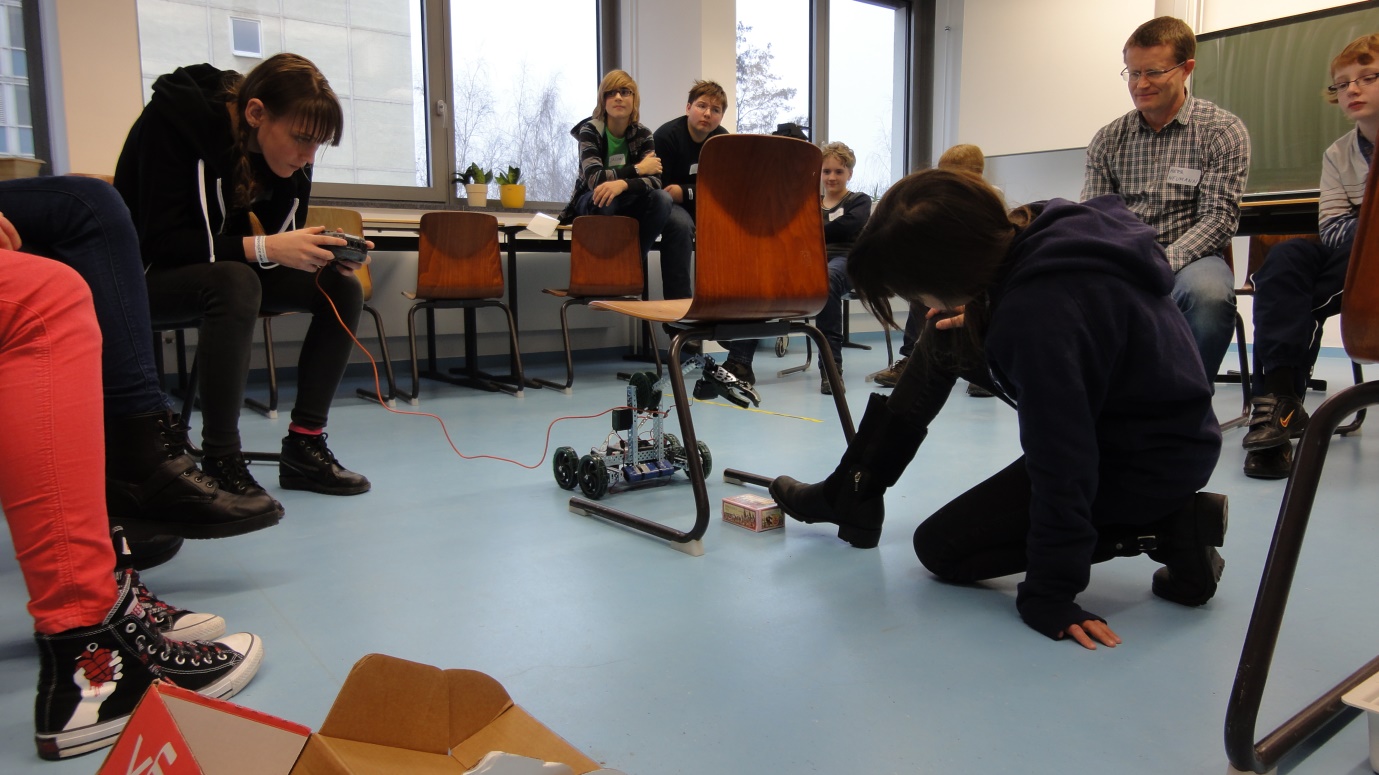 The afternoon was spent looking around the historic city of Leipzig including a look at the Battle of Nations Monument which was built to celebrate the defeat of Napoleon at Leipzig in 1812 during the war of the sixth coalition. The resounding feature of this monument was the (over!) 500 stairs which we had to ascend to view the whole of Leipzig. Unfortunately the inclement weather made visibility a little hazy on the day. After dinner and a quick re-visit of the Christmas markets, it was off to bed ready for an early start on Wednesday.

At the start of a very packed third day, Dr Scmidtt introduced students to a programming platform called Arduino. As a new platform, the session took the form of a taught lesson to begin with before students became familiarised with the small programmable robots and began working on a challenge set by the German roboteers. The students worked in mixed English and German groups as well as having an even spread of Girls and Boys. The challenge highlighted a number of differences both in the students and the way in which they worked through a problem. Interestingly, three out of four of the groups found a common ground to work from and worked in a way that would not necessarily highlight any language differences between the groups. Using a programming language appeared to be a good mid-point for all the participants to default to when needing to co-operate. The challenge was fun, educational and all the students gained valuable experience in working together and programming. 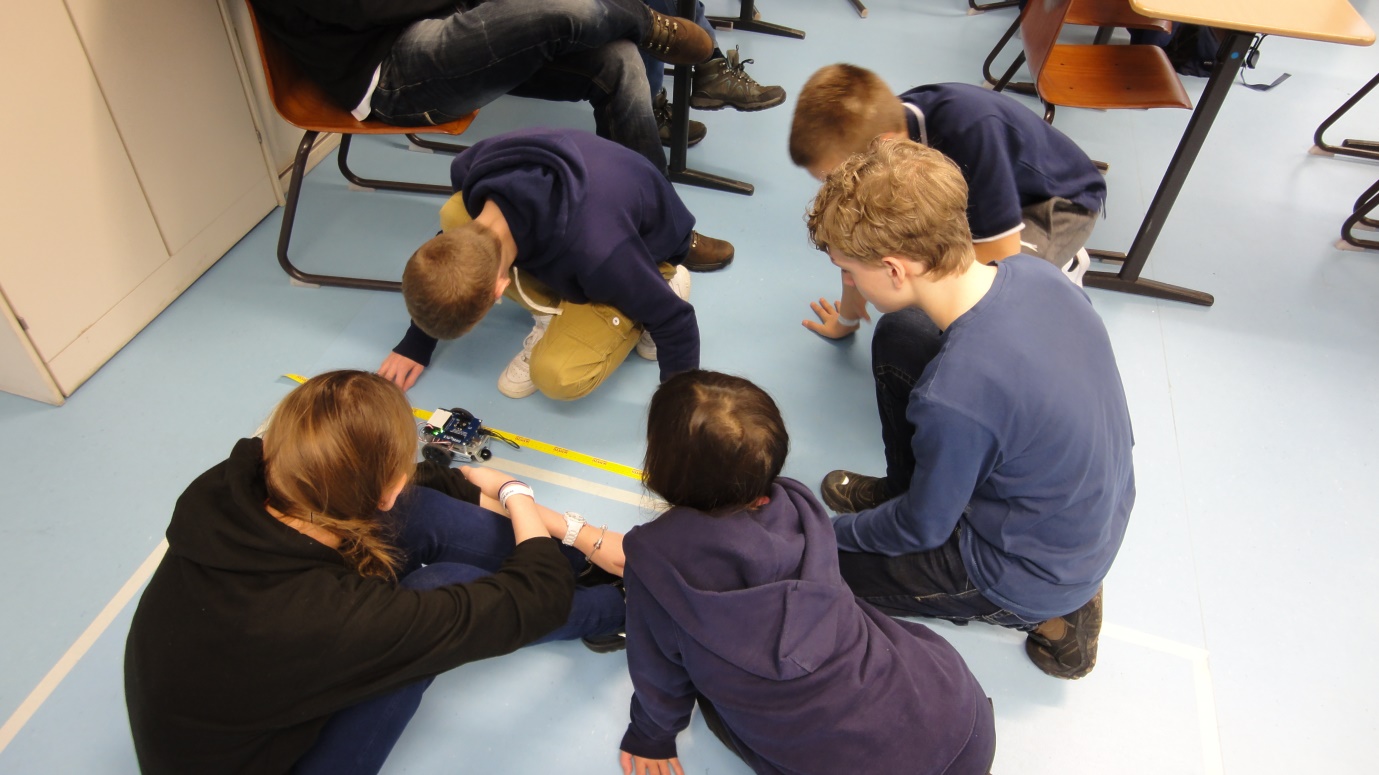 After a lunch break in the school canteen, it was back into Leipzig central to look at some of the landmarks that the city had to offer. The highlight of the tour around the city was an ironic visit to the Stasi museum where communication between Mrs Lamb and the group was forbidden. For a museum highlighting the horrific conditions that East Germany suffered after World War II and the surveillance and lack of civil liberties, to forbid a teacher sharing knowledge about the museum pieces gave some of our historians cause to smile.

There was just enough time for a break in the market square before refreshing ourselves back At the hotel and travelling by Tram back to the school for an evening of performances by staff and students at the school. Although some of the production was in French, most in German and a little in English, the quality of the performances was superb and we even had the opportunity to talk to some of the performers and had a special show case from one boy who had entered and won a film competition.

The final morning allowed us time to buy some gifts for relatives and to say our farewell to axel who presented the students with some treats and a framed montage of all the students and staff working together on the projects. A short train ride to the airport then it was time to catch our flight back to Stansted.

What next? During our visit we handed the German pupils a challenge. This challenge is to build a robot capable of picking up and re-arranging several 6” balls and barrels in a taped off arena. The pupils will have until May 2014 to build and program their robot whilst our students do the same. In May we hope to invite the Group to England and they can demonstrate what they have learnt and fulfil the challenge at The John warner school. In the interim, a webpage has be designated to a discussion forum so the German pupils all tutors can converse with our students about technical aspects of the challenge and upload videos or photos as the project develops. 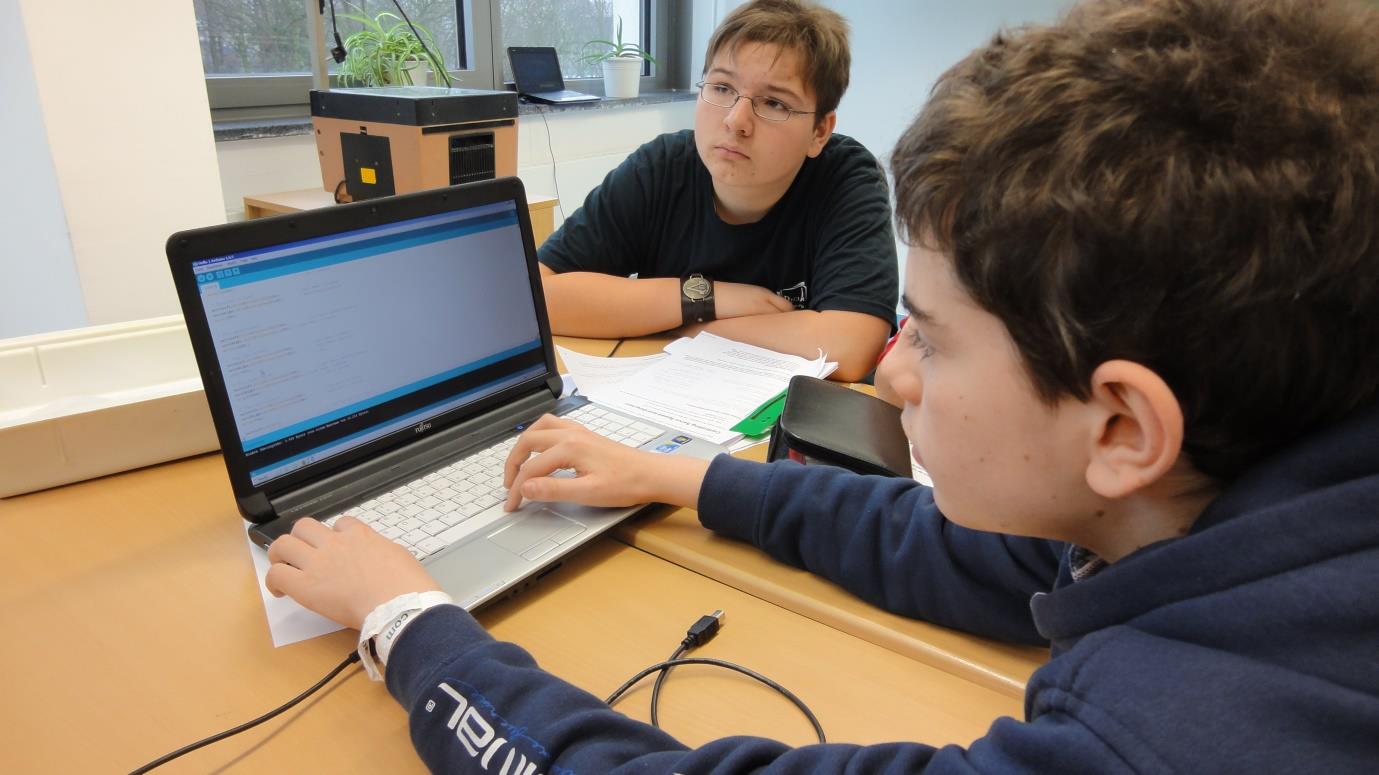