Niall Goodwin, Daniel Rowe, Lizzie Hunt and Nina Jansen have battled 39 other VEX robotics teams over a three day competition to become the UK’s National Champions for the 2013/2014 season where they have been playing the official VEX game, Toss Up.

The game, consisting of 10 Bucky Balls and 4 Large inflatable balls challenged students to score as many points in a 2 minute game as they could whilst also striving to hang their robot from a 40″ bar at the end of the game. The team had to design and build their own robot to fit within an 18″ cube before competing in a number of regional competitions to reach the final which took place at the NEC in Birmingham on the 13th/14th and 15th March 2014.

The team had a solid qualifying run, maintaining a top 10 position through out before teaming up with Virus and Volt robotics from East Barnet School for the final knock out stages. They stormed through both the quarter and semi finals to meet the pre-tournament favourites XLR8, the Green Team and our own 3116B in the final. In a best of three match up, the game became very tactical and the experience of 3116 and the East Barnet teams showed as they out manoeuvred their rivals to deny them many scoring opportunities. This adds to the seasons success for 3116 with several tournament wins and trophies already under their belt and their Design award from the 2012 National final. 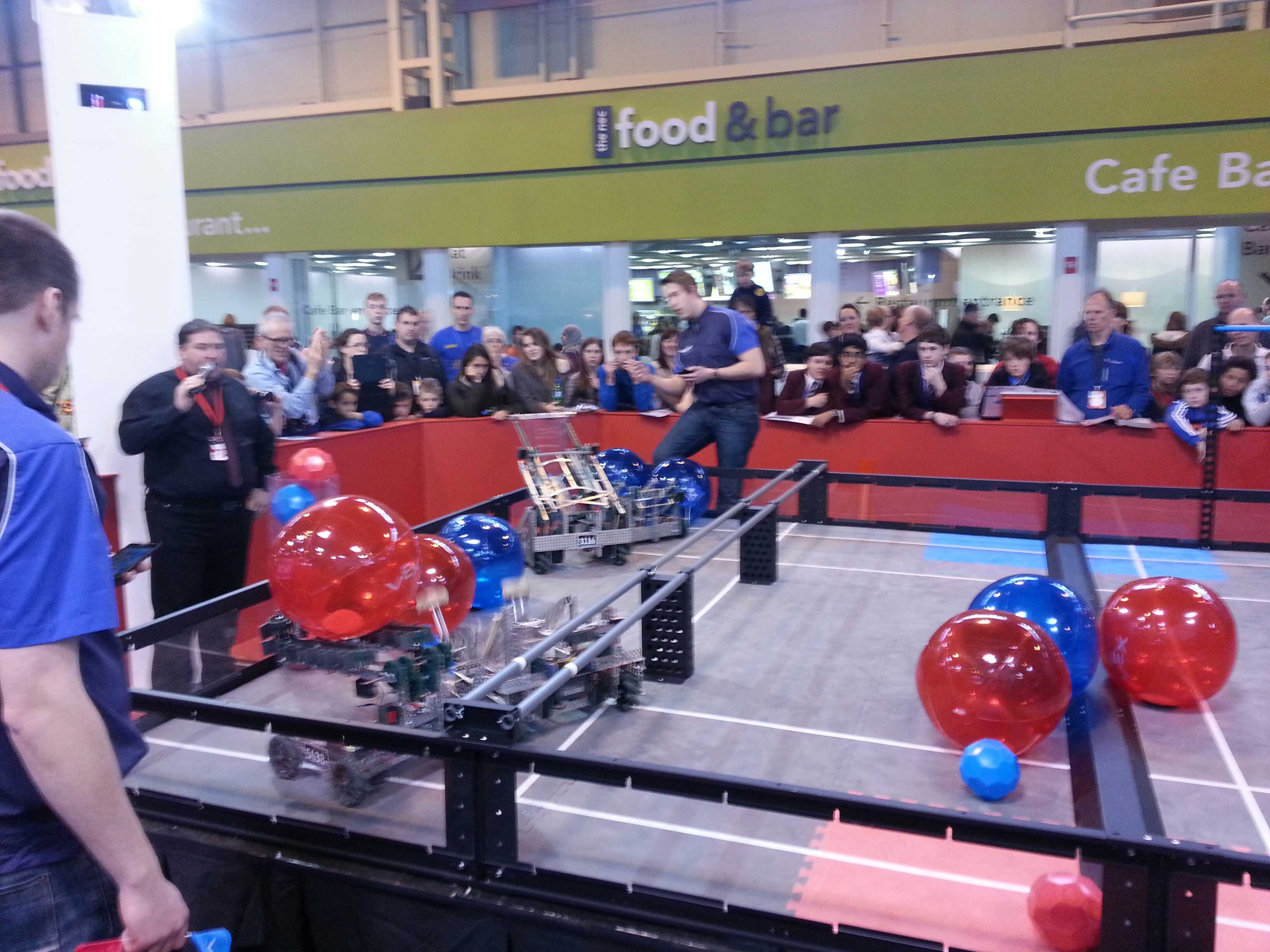 Tense moments as the final gets tactical

The other John Warner teams had fluctuating qualifying experiences. 3116A had a torrid time qualifying down in 24th place before being picked to support 6053 (Highgate School) and 5638B (Eversham High School) in the elimination stages. Jake Stinson and Stuart Pryce played in all the knock at rounds up to the semi final where they were involved in an epic battle against the top two seeds and our own 3116B, narrowly losing out 2 games to 1.

In their first robotics season, team 3116B managed a very respectable 18th qualification spot and had done a lot to impress the other teams at the tournament. Their performance was so good that the pre-tournament favourites 4664A (XLR8) and the second seed (The Green Team) from Nottingham High school selected them as their third alliance. Having the easiest of the draw in the quarter final gave them an easy first round but the second round couldn’t have been much closer. Chandler Walker, James Cosgrove, Sam Best and Carl white has to use of their knowledge of their own team, rivals (3116A) to ensure victory and they benefitted from a very unlucky breakdown in the closing stages. 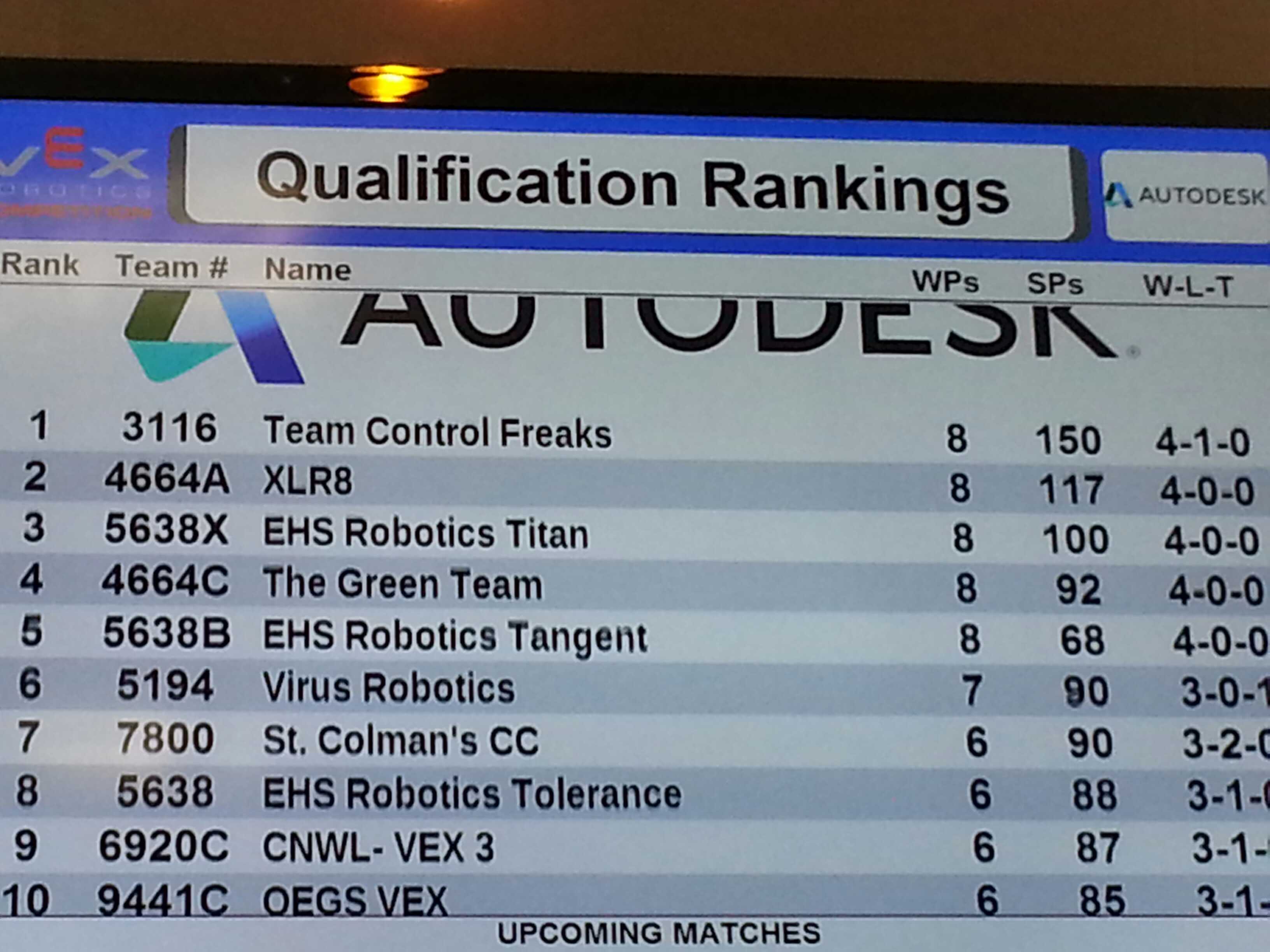 Riding high early on day one

Second season returnees Ben Dance, Josh Clancy, Cerys Edwards, Deon Graham and Dan Horne had, possibly, the biggest gains and losses during qualification. they had a number of tough early games that had left them low in the table in the morning but by the afternoon had climbed back up to the correct end of day one. A poor start again on day two sent them back down before my favourite moment of the tournament. Allianced with a team low in the table and up against the top team, unbeaten in 14 games who themselves were allianced with another top ten team, the chance of a win looked bleak. a quick tactical conversation with their lowly alliance and a strong autonomous phase gave 3116C an early lead. A supreme piece of driving by their alliance partner, using some Jose Mourinho esque tactics and 3116C had become the first and only team to defeat XLR8 in the qualification stage. This win sent ripples through the selection process and suddenly all the Team Control Freak robots were being eagerly sought by potential knock out stage alliance partners.

3116C had earned themselves a selection spot and chose two worthy partners 5119Z (E-Lemon-ators) and 6920C (College of North West London) but unfortunately had to face the eventual winners in their quarter final stage. 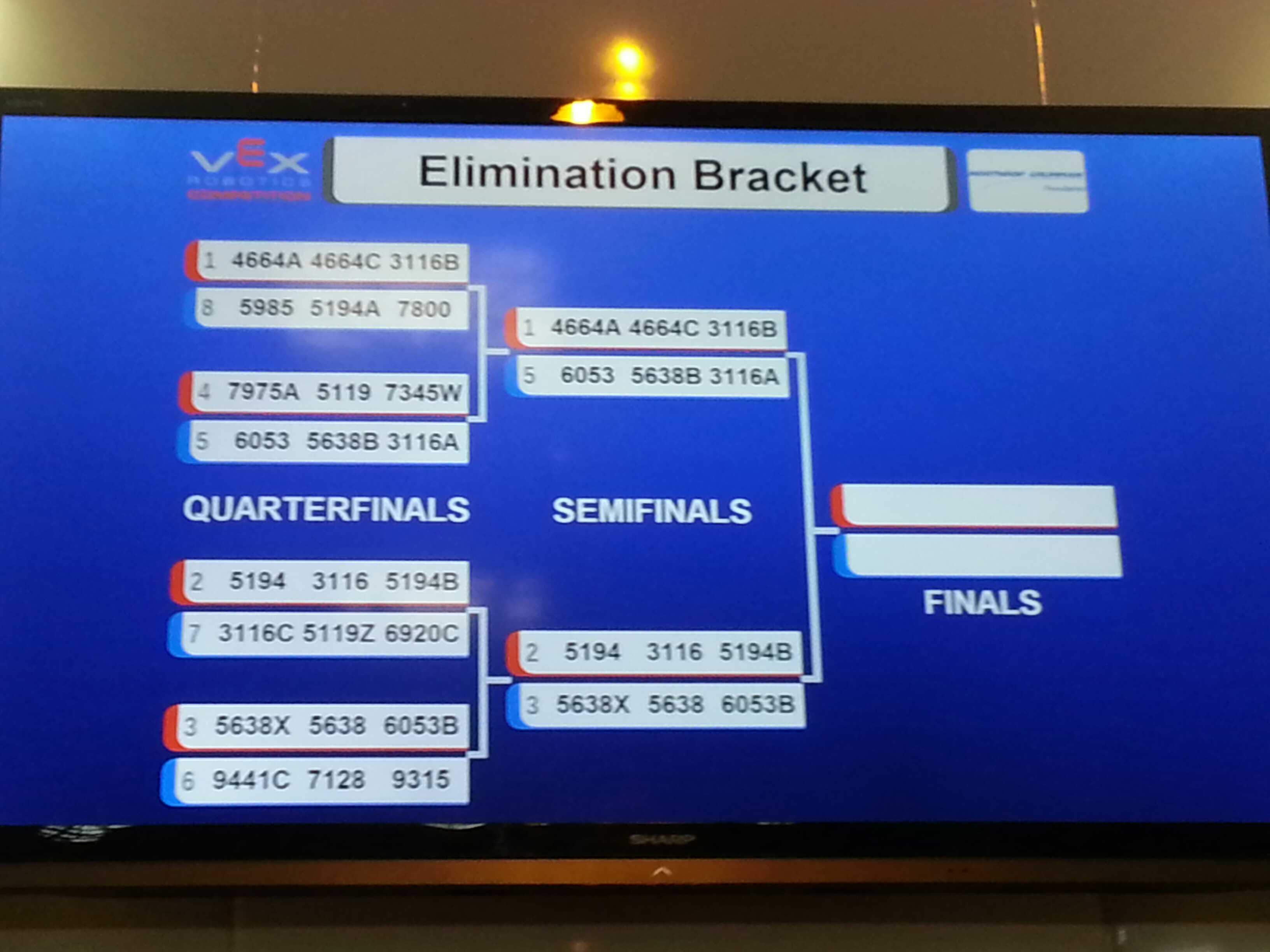 The elimination bracket before 3116 met 3116B in the final

So after three days of ups and downs, the teams should be proud of themselves as we now have a National Champion and all our teams were eventually knocked out by their own team mates! They should all be proud of themselves and recognise the brilliance of their achievements both as individuals, as separate teams and as the Control Freaks! Well done everyone. 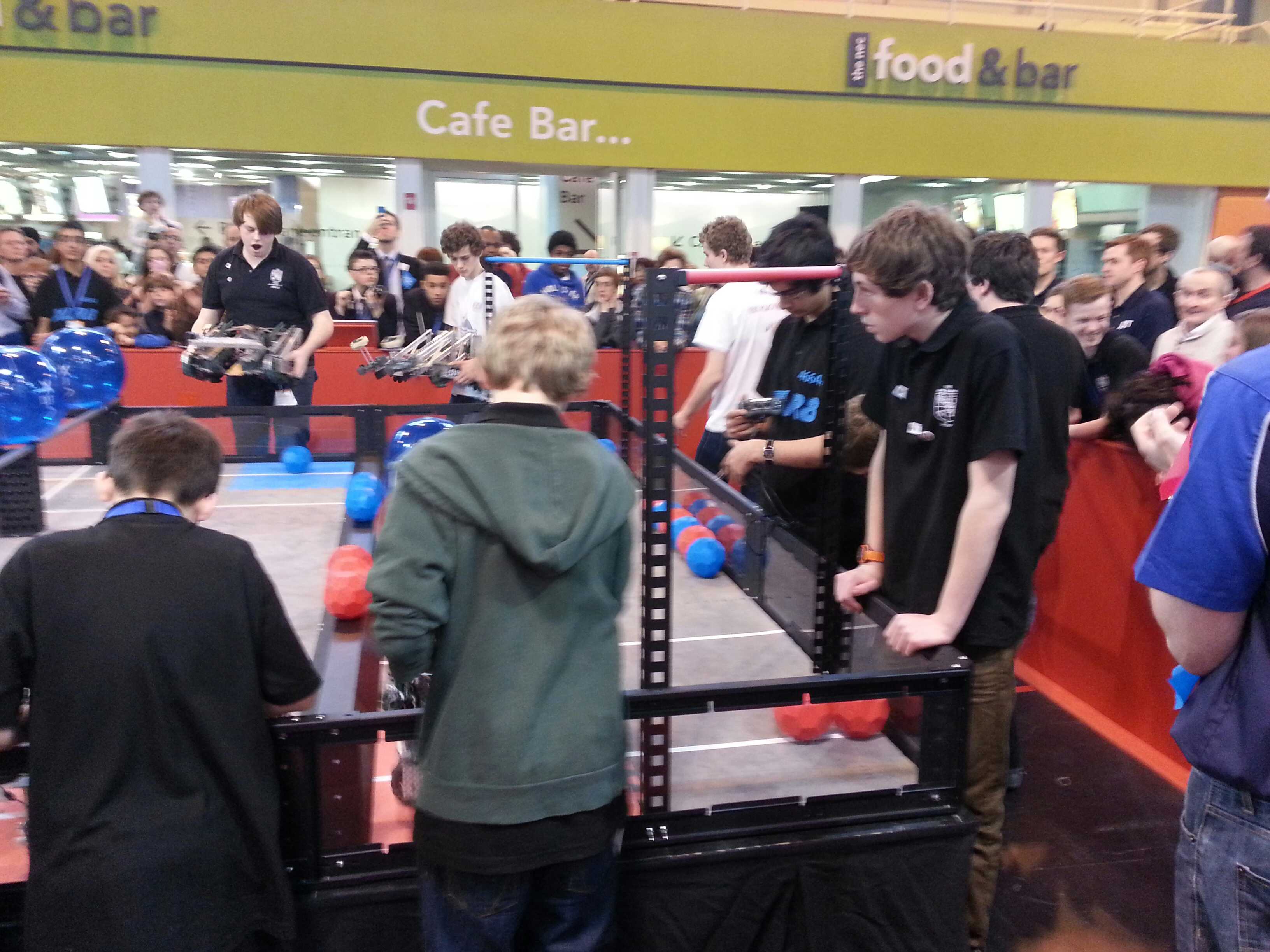