Best ever showing for UK schools at VEX World Championships

Six teams from the UK joined thousands of pupils from across the globe to compete at the 2014 VEX Robotics World Championships in California, with notable performances from two of the teams. 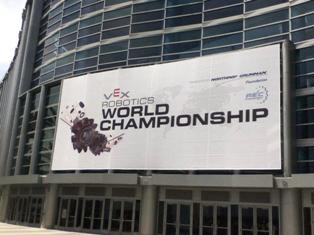 The highest ranked British team were ‘3116 Team Control Freaks’ from the John Warner School in Hertfordshire, who finished 14th out of 86 teams in the High School Maths division – the highest placing yet for a UK team. ‘Volt Robotics’ from East Barnet School were ranked as high as 7th in the same division after the first day, but could not quite maintain their 100% record and eventually won six out of their ten matches. ‘XLR8’ from Nottingham High School achieved a first for UK teams at the World Championships when they competed in the Quarter-Finals, after being selected as an alliance partner by two US teams.

These were the final results of the UK teams:

The overall winners were teams from schools in the US, New Zealand and Canada and China in the Middle School Division.

One of the highlights of the World Championships is the launch of the following year’s VEX Competition Game, which in 2014-15 is called ‘Skyrise’. It challenges teams to build towers and pick up and place cubes.