On the 21st April, 2014 –Easter Monday – 10 students and 2 teachers boarded a flight to Los Angeles to take part in this year’s VEX Robotics World Championship. This year’s event was to be bigger than any held previously with over 700 teams from 28 countries taking part and 15,000 people on site to support, build, compete or just spectate. The flight was comfortable with only a few people on board and we settled down for the long haul hoping to land fresh in Anaheim on Monday afternoon.
On Tuesday, having spent more than 16 hours travelling the day before, the teams set about unpacking their kit and robots. Considering that the robots had travelled all the way across the Atlantic and over the entire width of the USA, they were in remarkable condition and operated nearly perfectly straight out of the box! This gave us the opportunity to go and explore the local area and to meet up with some of the 430 teams that would be competing against us in our division. As well as our competition, a middle school and a University division had been created but the High School division was by far the largest.
On Wednesday we were up early to ensure all the kit was ready and then we made the short journey from the hotel to the Anaheim convention Centre complex. First order of the day was registration followed by a period of loading our pit area and setting up our display so that other teams know who we are and where we come from. Arriving early allowed us to see the other teams arrive in a myriad of colours and different uniforms. Once set up it was time to have our robots inspected. This is a process employed to ensure all the competitors adhere to the stringent rules. This year we sailed through with no technicalities or adjustments needed.

Wednesday afternoon was spent making friends and looking for potential alliance partners for later in the competition. During the final stages teams must compete with two other teams against their rivals and must co-operate and work together. Having friends early on always makes this process more fun and can help further your interest in the competition.

Thursday saw the official opening of the Championships with awards given out for teams who had submitted online work. Amongst these were opportunities to create websites, promotional videos and an essay based on community work with VEX. Once the ceremony was over, all the teams were put into divisions of 86 teams and the first matches began. Both the John Warner Teams (3116 and 3116B) only had two matches whilst others had three. With ten matches in total for each team, it was an easy start to our schedule which promises to get more hectic!

At the end of Thursday, both 3116 and 3116B have won both of their first matches putting 3116 into the top 10 and 3116B just outside – the highest position any John Warner team managed at the last championship in 2012. Friday promised to be busy with 6 matches scheduled for both teams and we hoped we could maintain our excellent start on both fronts. The competition will then carry into Saturday for the final qualifying league matches before the top 8 choose their alliance partners.

Friday continued much as Thursday had begun for 3116 but sadly 3116B began to suffer defeats that would eventually see them drop down to the lower half of the table. 3116, however, maintained their unbeaten run and negotiated some tricky matches to complete the day in top spot! With some other games still to be played, they dropped down to third overnight mainly due to the complex system of schedule points (like goal difference!) and a hard fought draw in their sixth match. Hopes had never been higher that we could make the knock out stages and with only two games remaining, a top 25 finish looked certain. 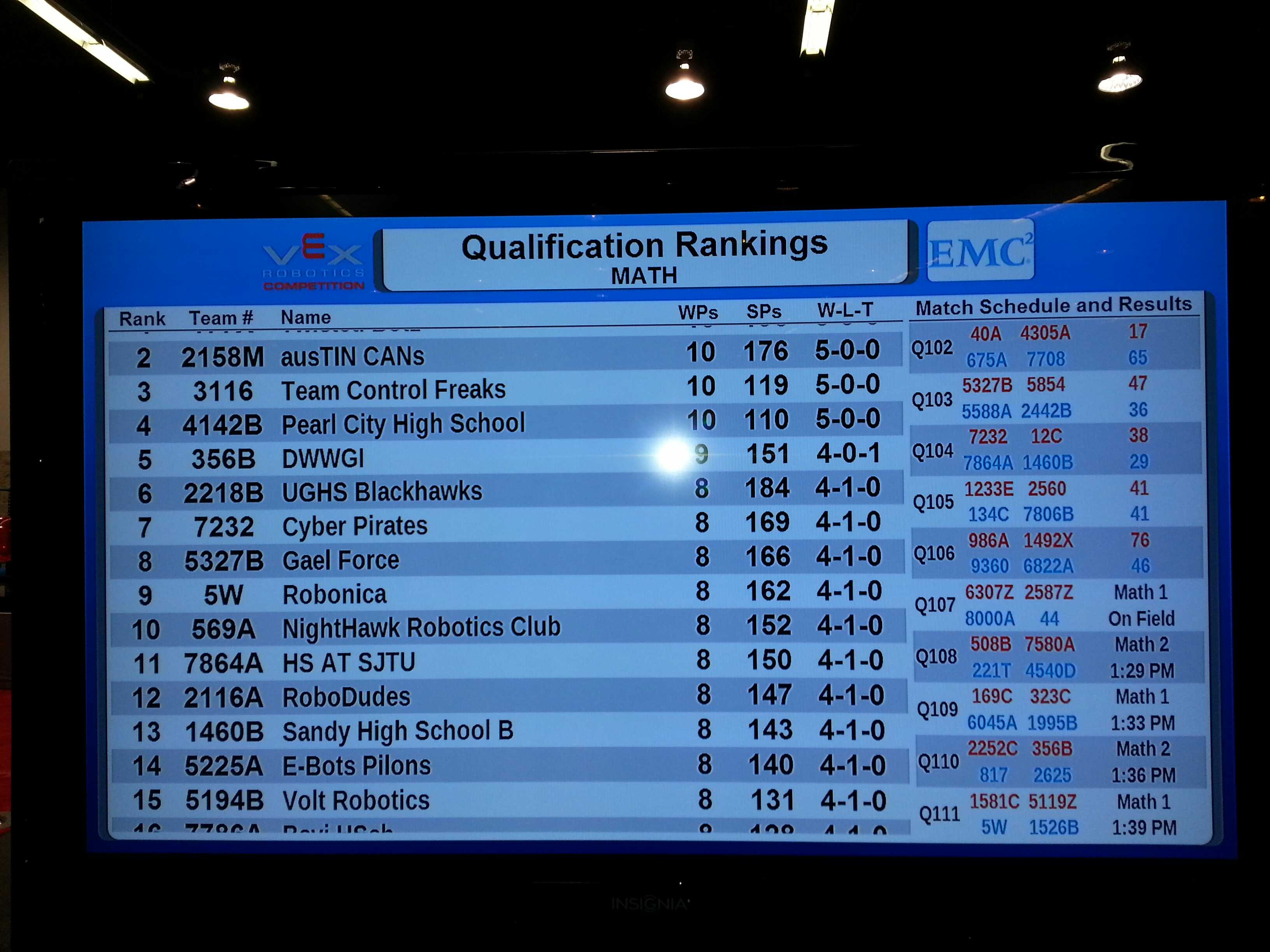 Saturday matches began at 9:00am and the team were first up. This would promise to be a tight game with both alliances fielding one strong robot and one weaker partner. The match began badly for 3116 as their partner refused to move of the starting tile whilst the opposition began scoring freely. Outnumbered two to one, they team had little chance and a frustrating first defeat became inevitable. Onto match two of the day and both alliances looked to be evenly matched. The game started off better with both teams scoring freely and our alliance had a great chance to take a fifteen point lead when the opposition somehow managed to get under the robot and flip it backwards. Sometimes this manoeuvre would be deemed illegal and the offending robot disqualified but the judges ruled that both had been trying to score simultaneously. Once again outnumbered two to one for the final half of the match, the final score resulted in a 20 point loss. The table now looked bleak as we dropped down to fifth, then eighth and with other games being played, down to fourteenth.

One of the best features of VEX robotics is the chance for the top eight teams to pick an alliance partner for the knock out rounds. Having performed so admirably for the duration of the competition, we hoped that one of the top eight teams would pick us. As the selection process unfolded, teams who had been eager to befriend us when we were riding high deserted us for their American friends and we were left as the highest ranked team not to be picked. A frustrating end to the competition but still the highest place a UK team has managed which is also the highest a European team has achieved in the qualifiers. Added to this the fact that we ranked number one for the least points conceded throughout the entire competition and it demonstrates how far our small team from a distant Island has come over the past three years. Next year we aim to be in the top eight and the ones choosing alliance partners! 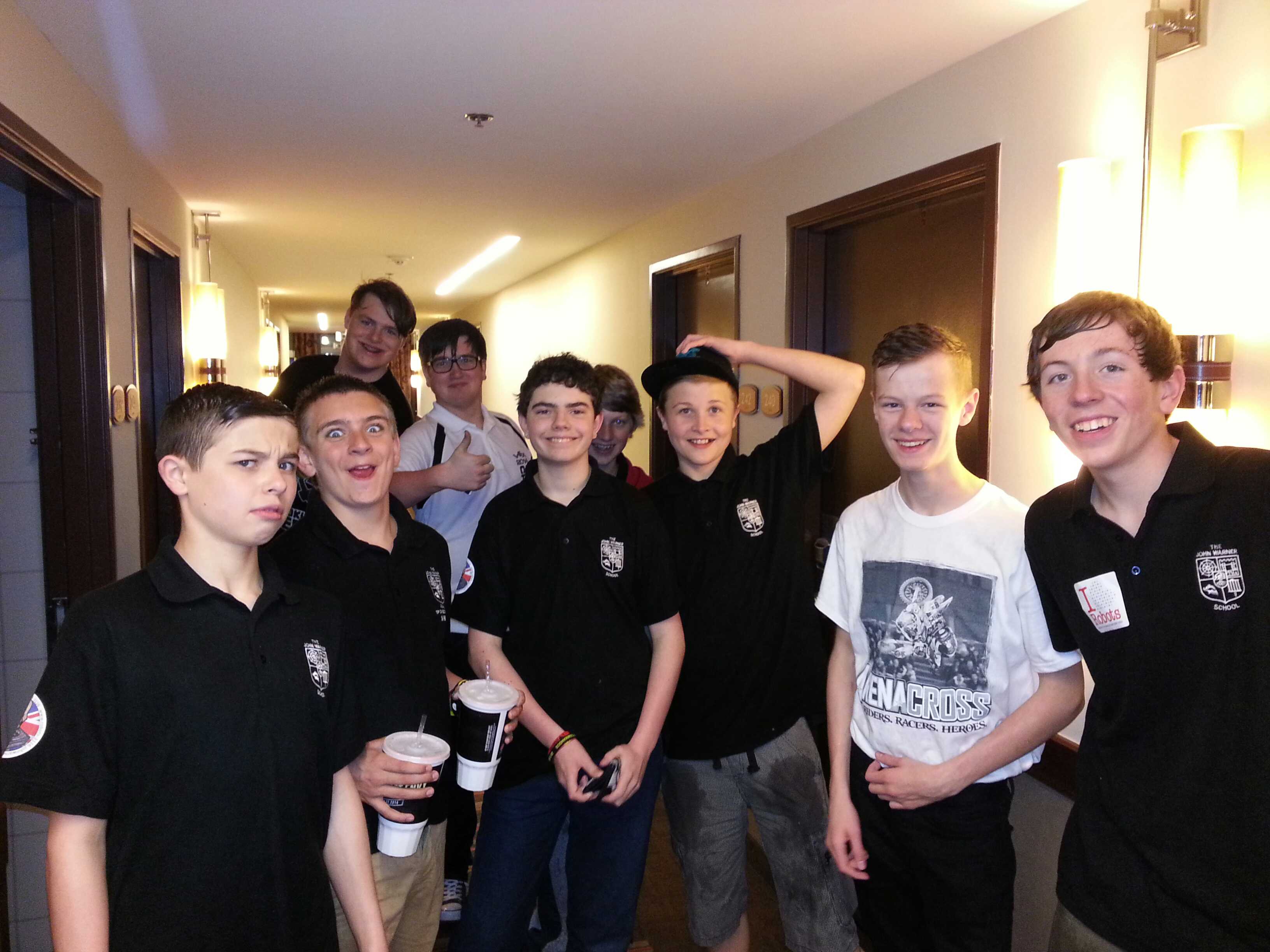