The 2017 VEX UK Nationals was an interesting competition for 3116C. We came to the event knowing that this would either be the last competition of the season for us, or the competition that extends our season to the VEX Robotics World Championship in April. 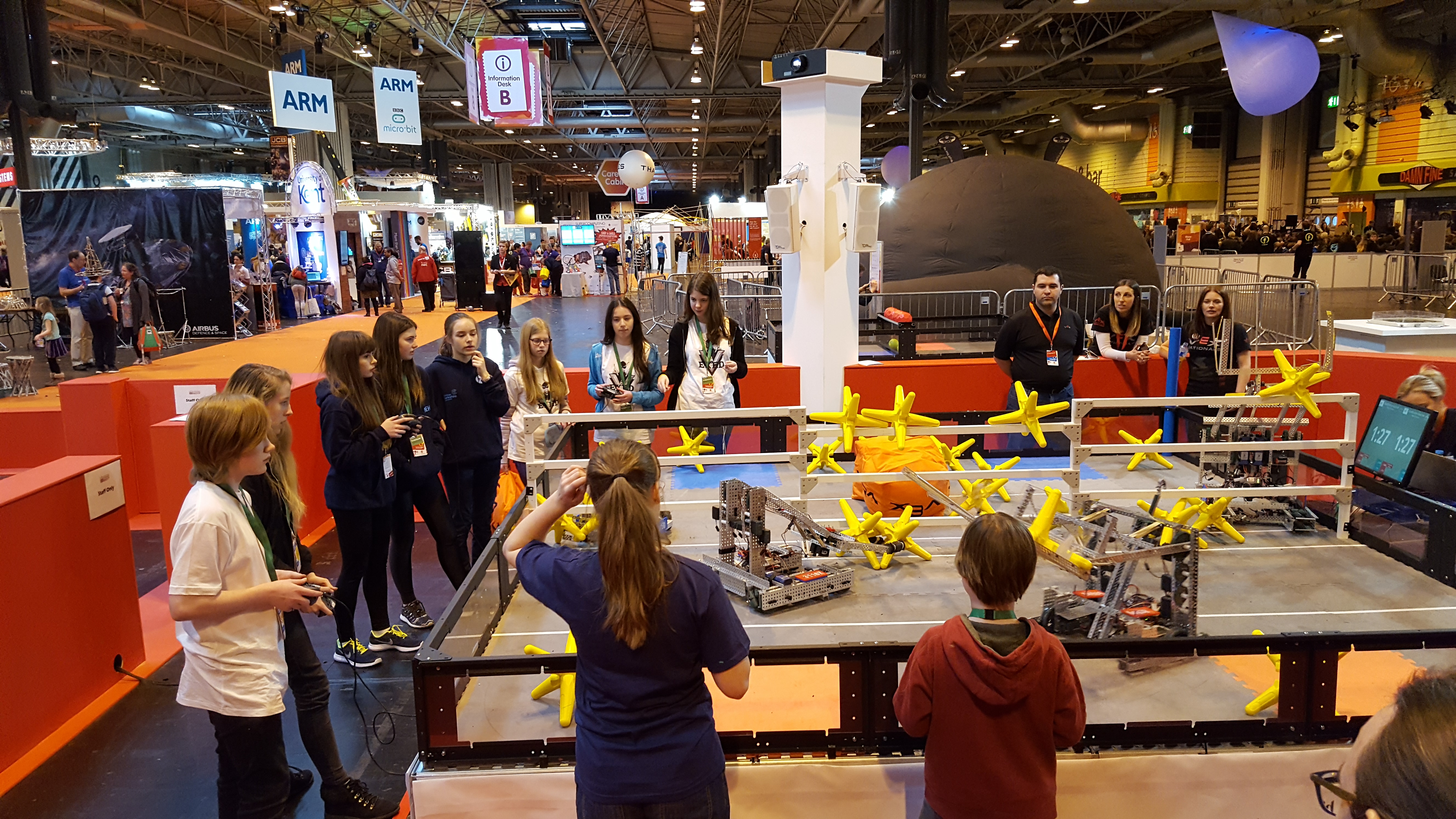 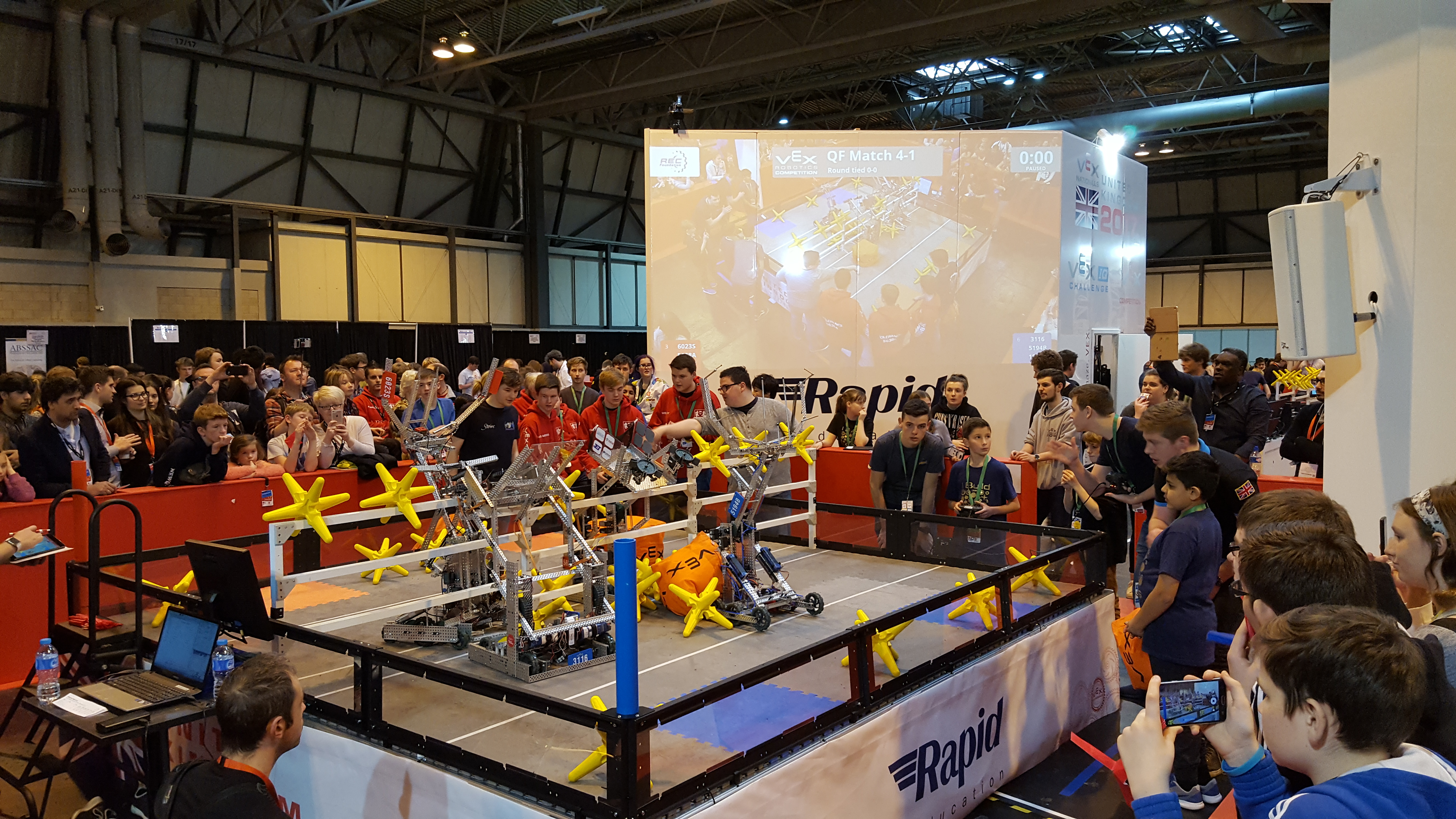 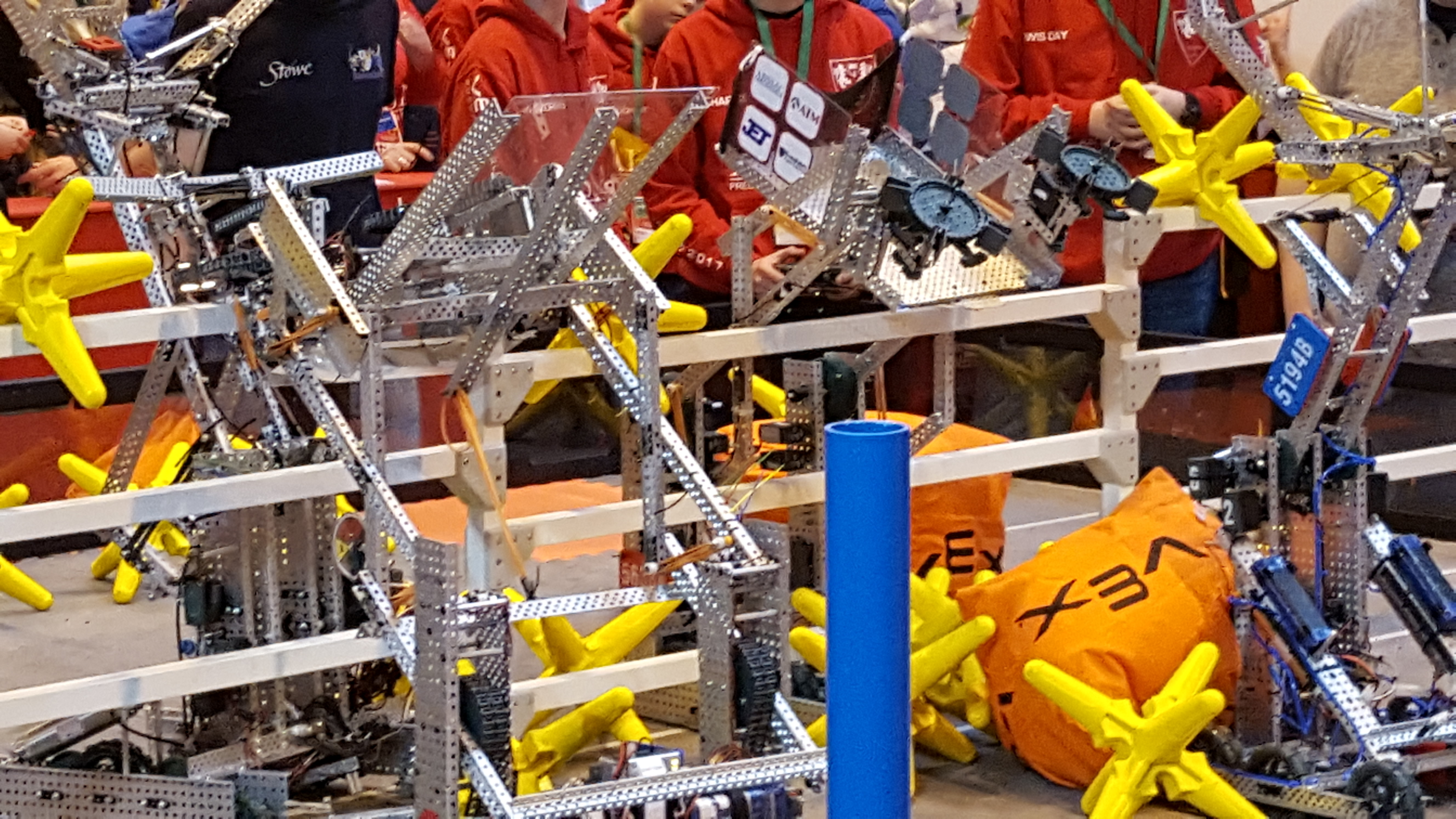 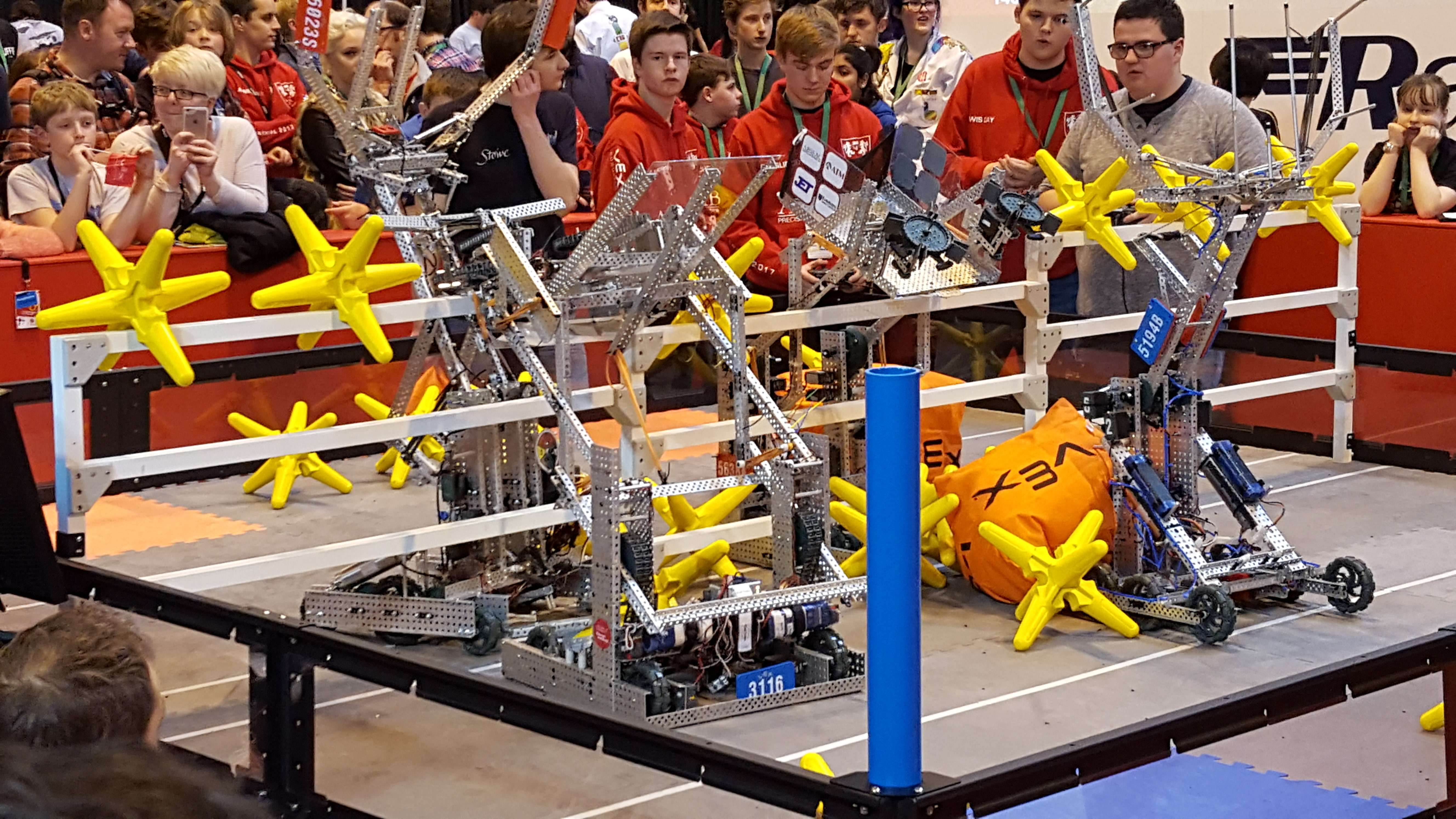 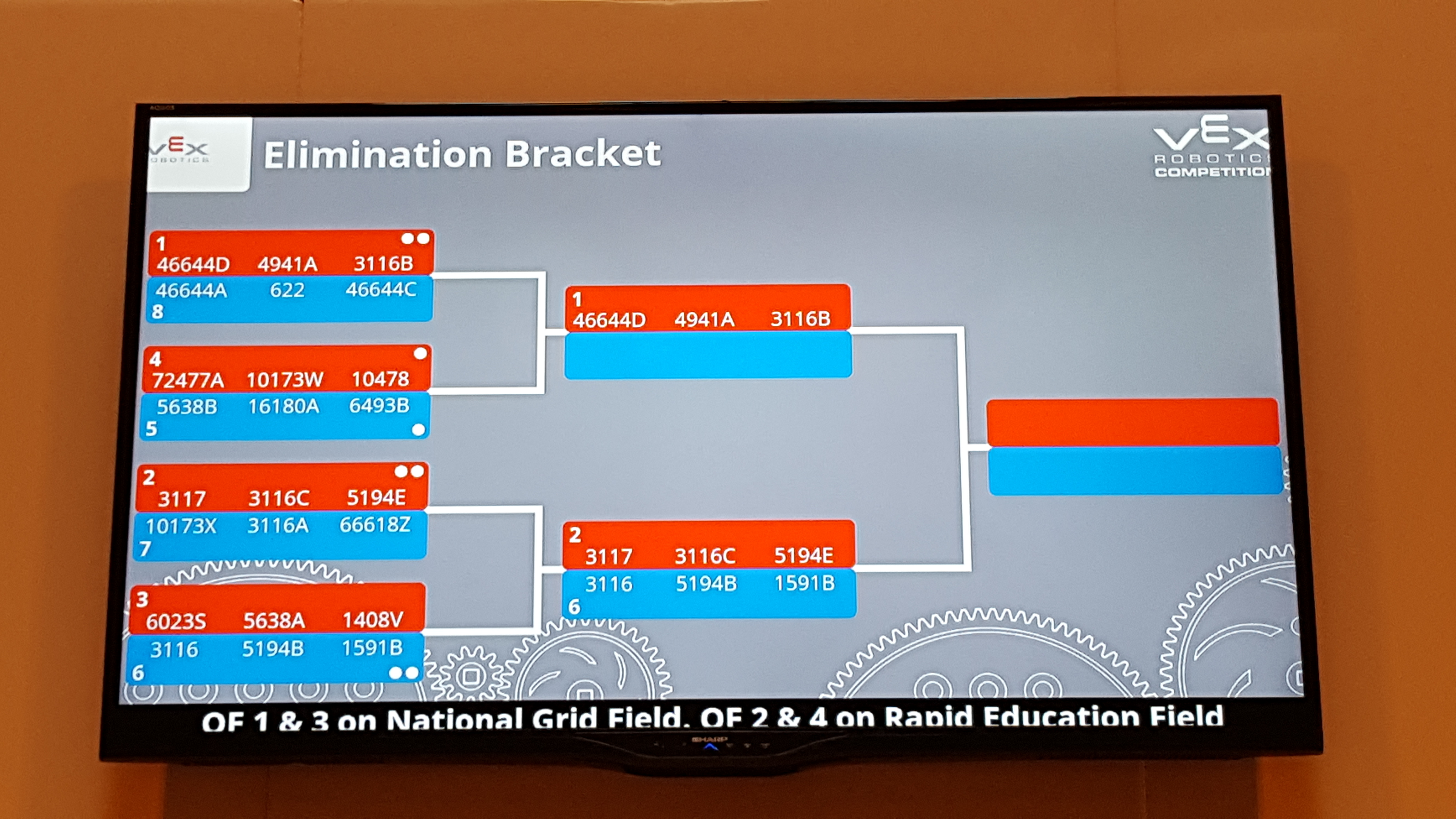 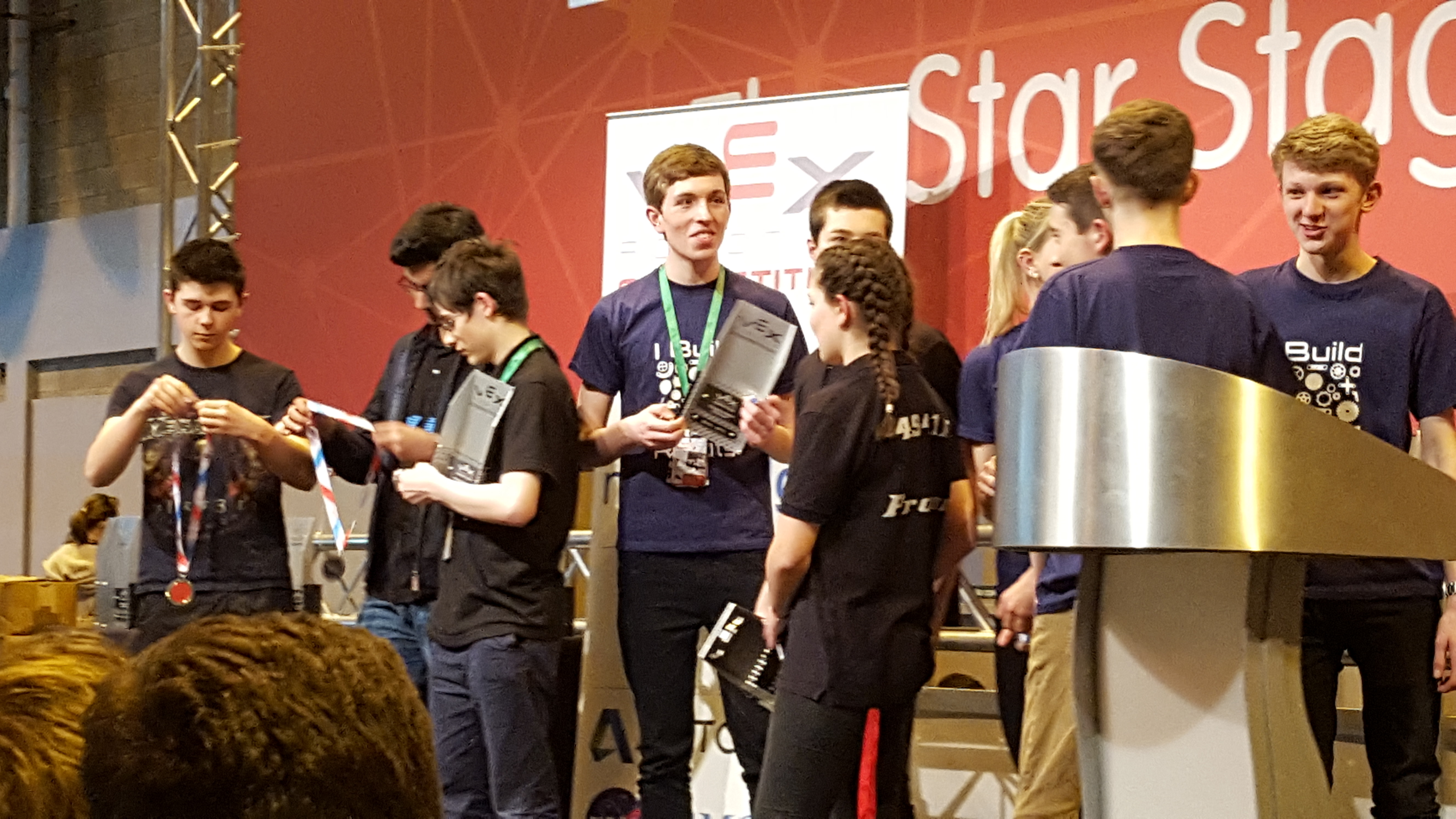 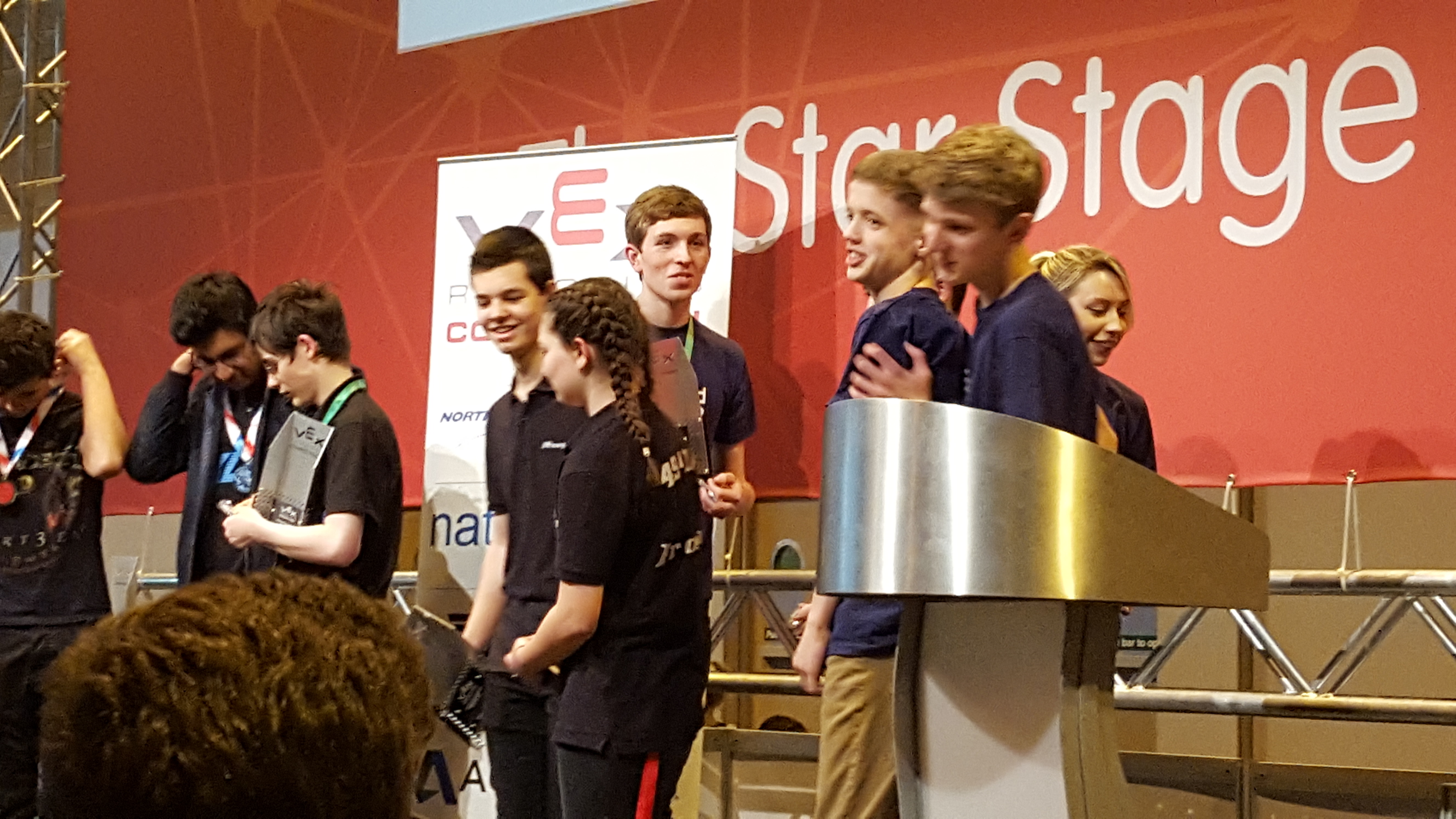 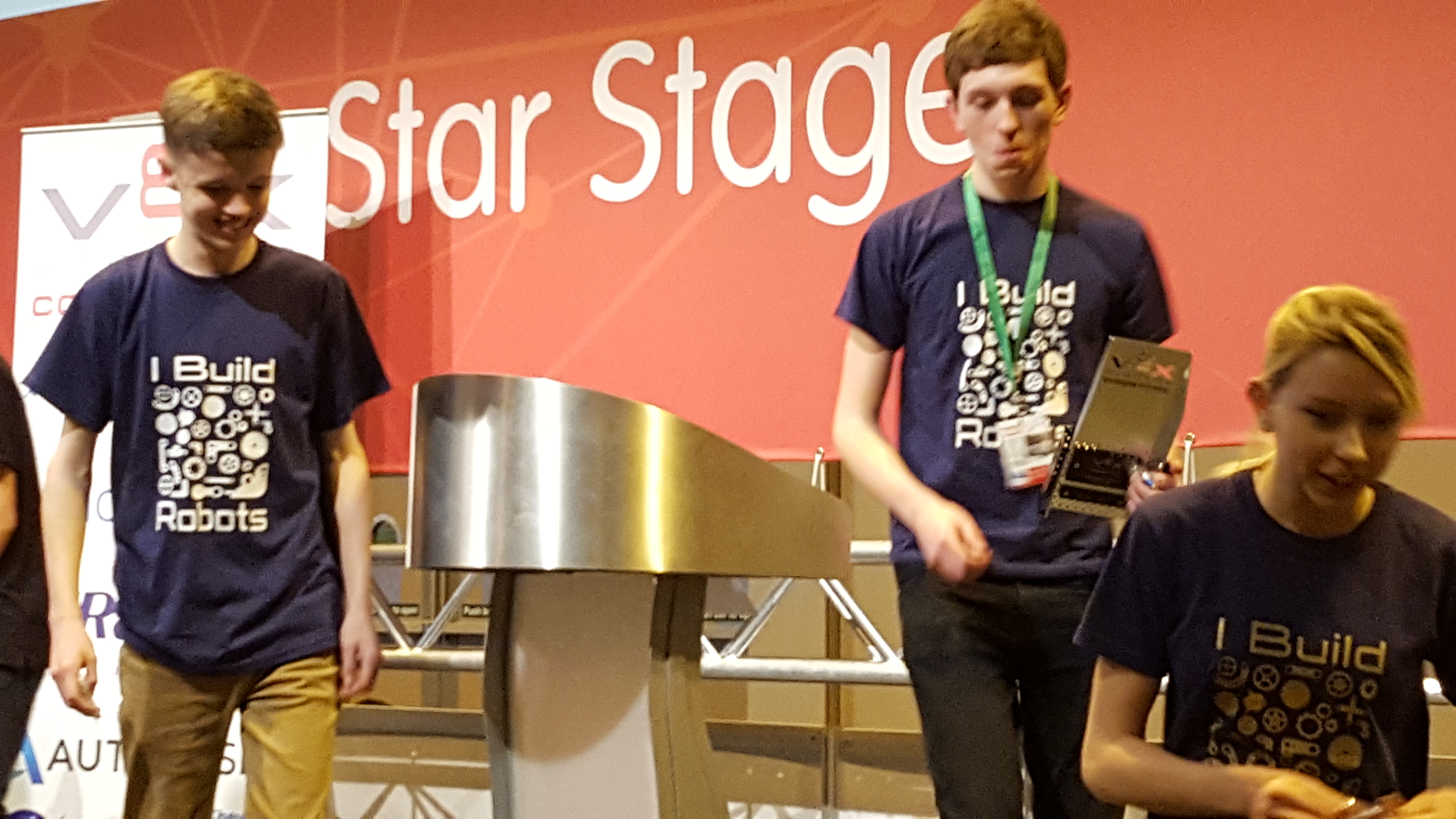 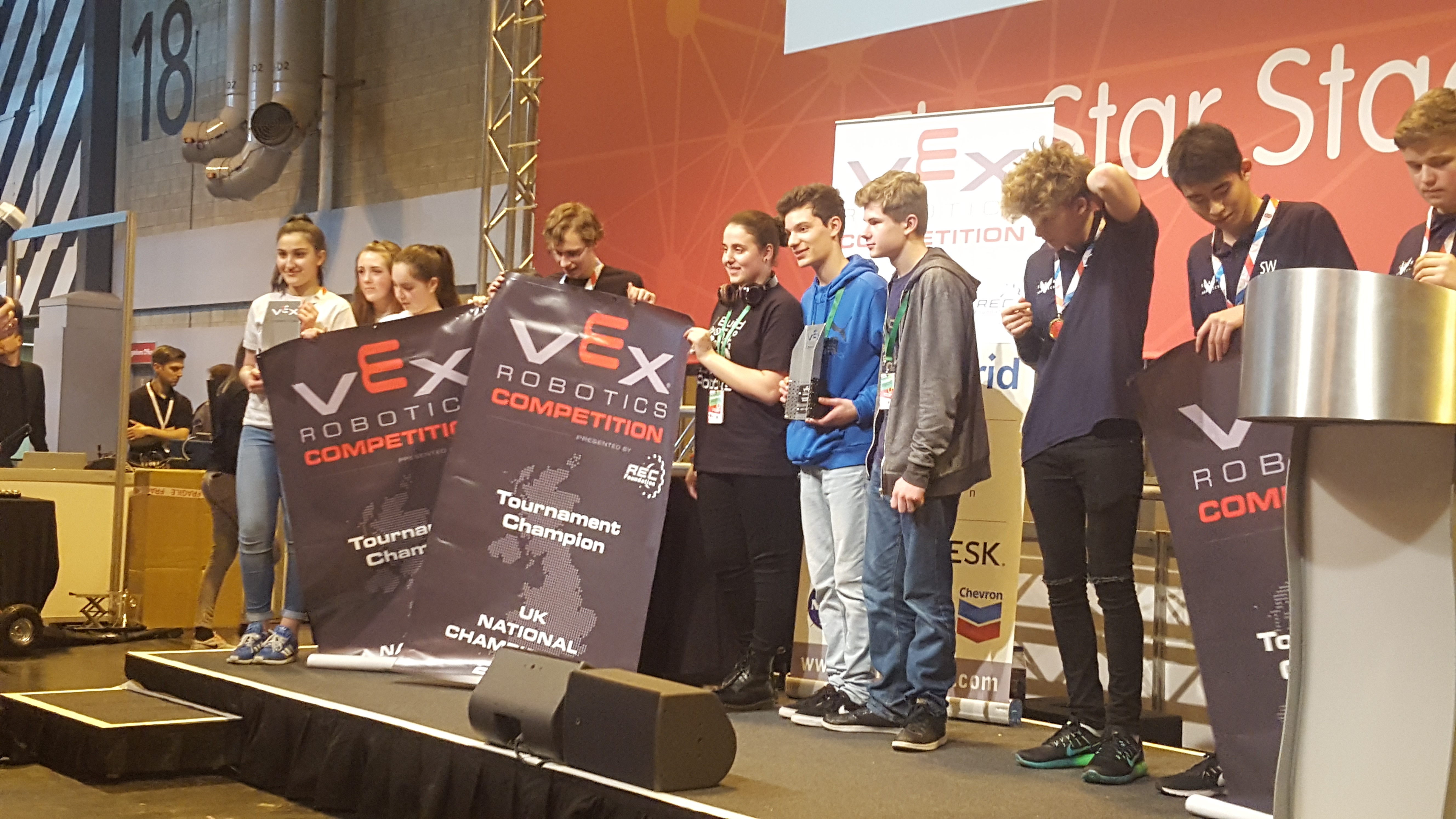 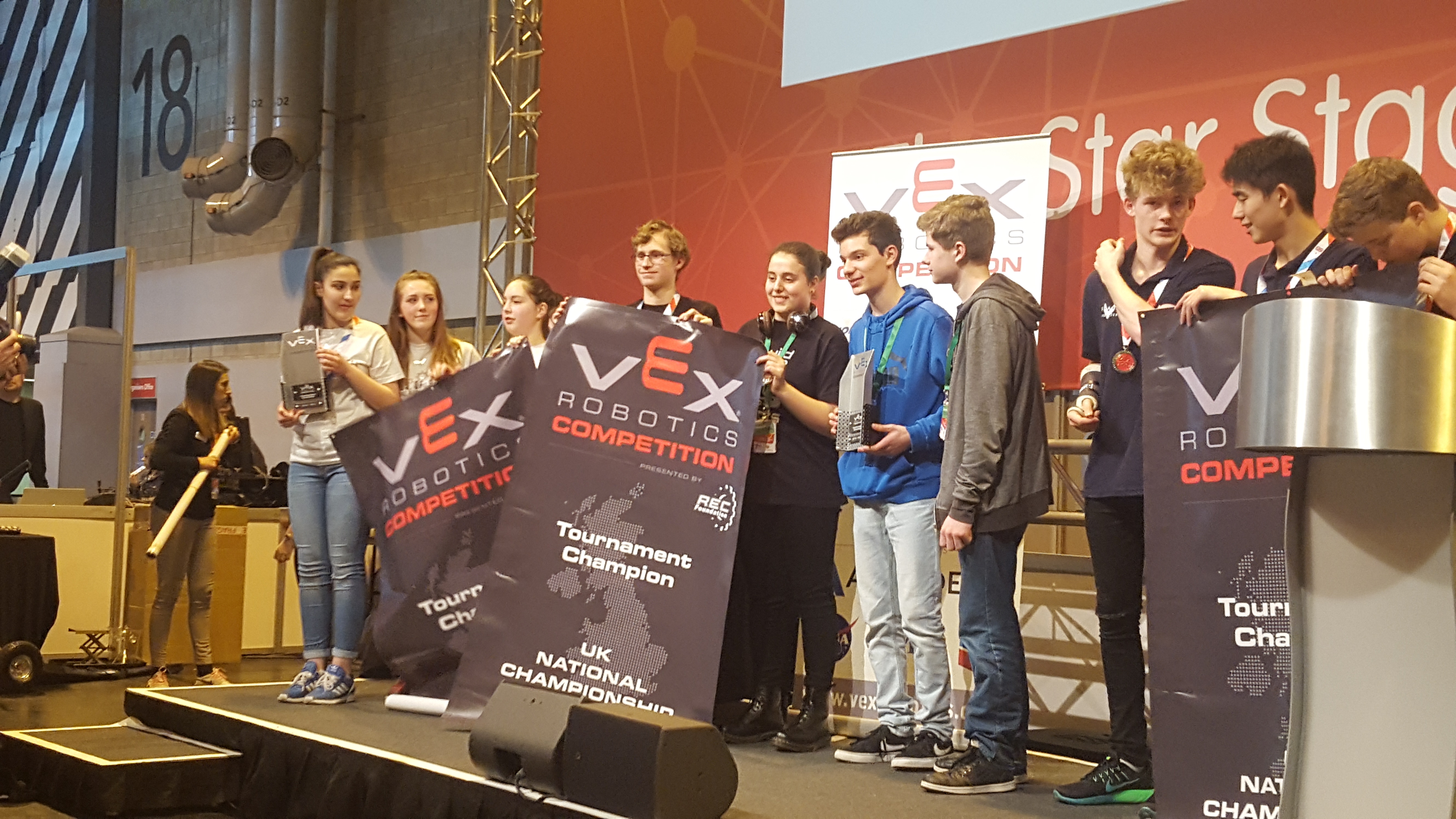 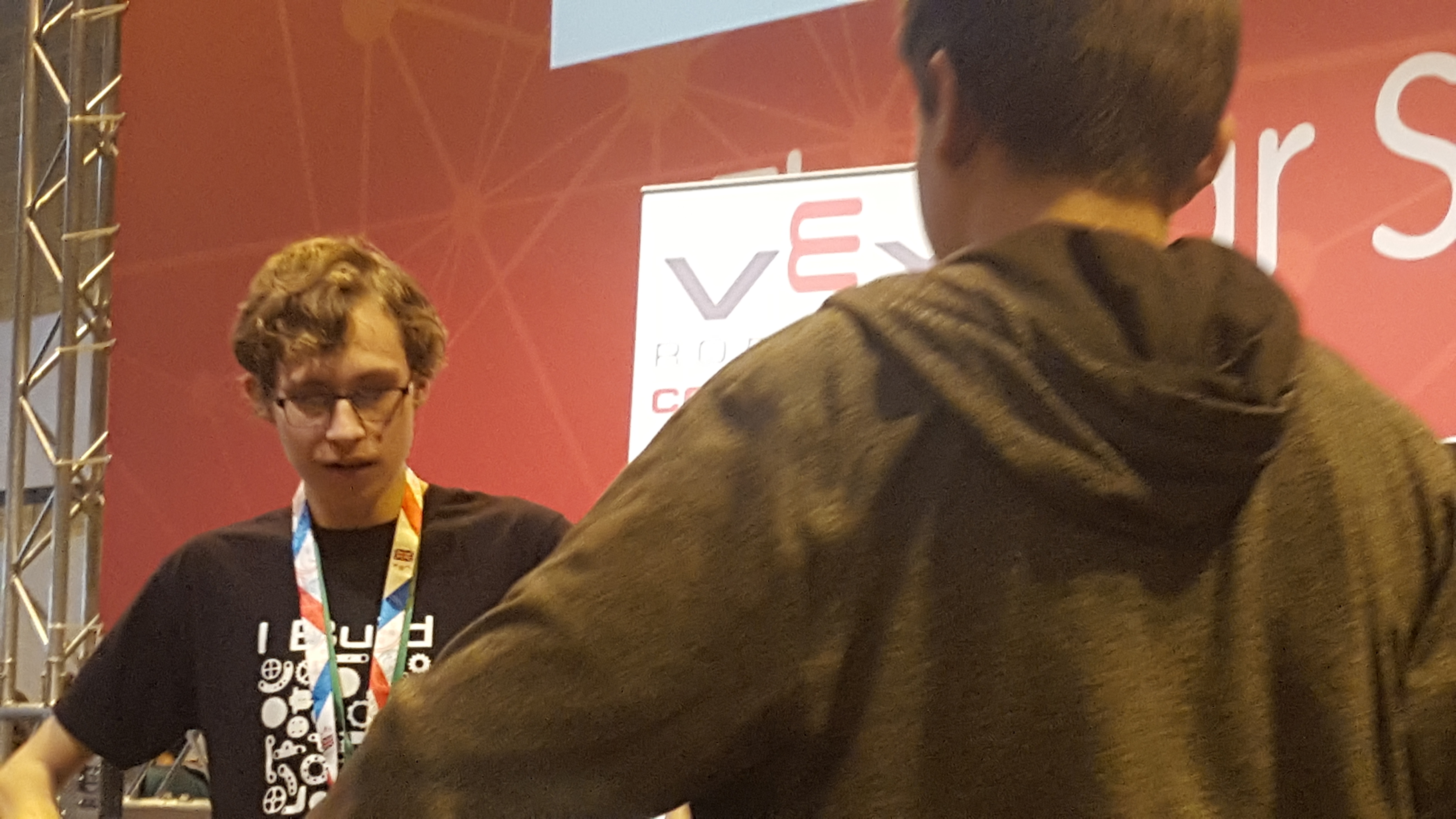 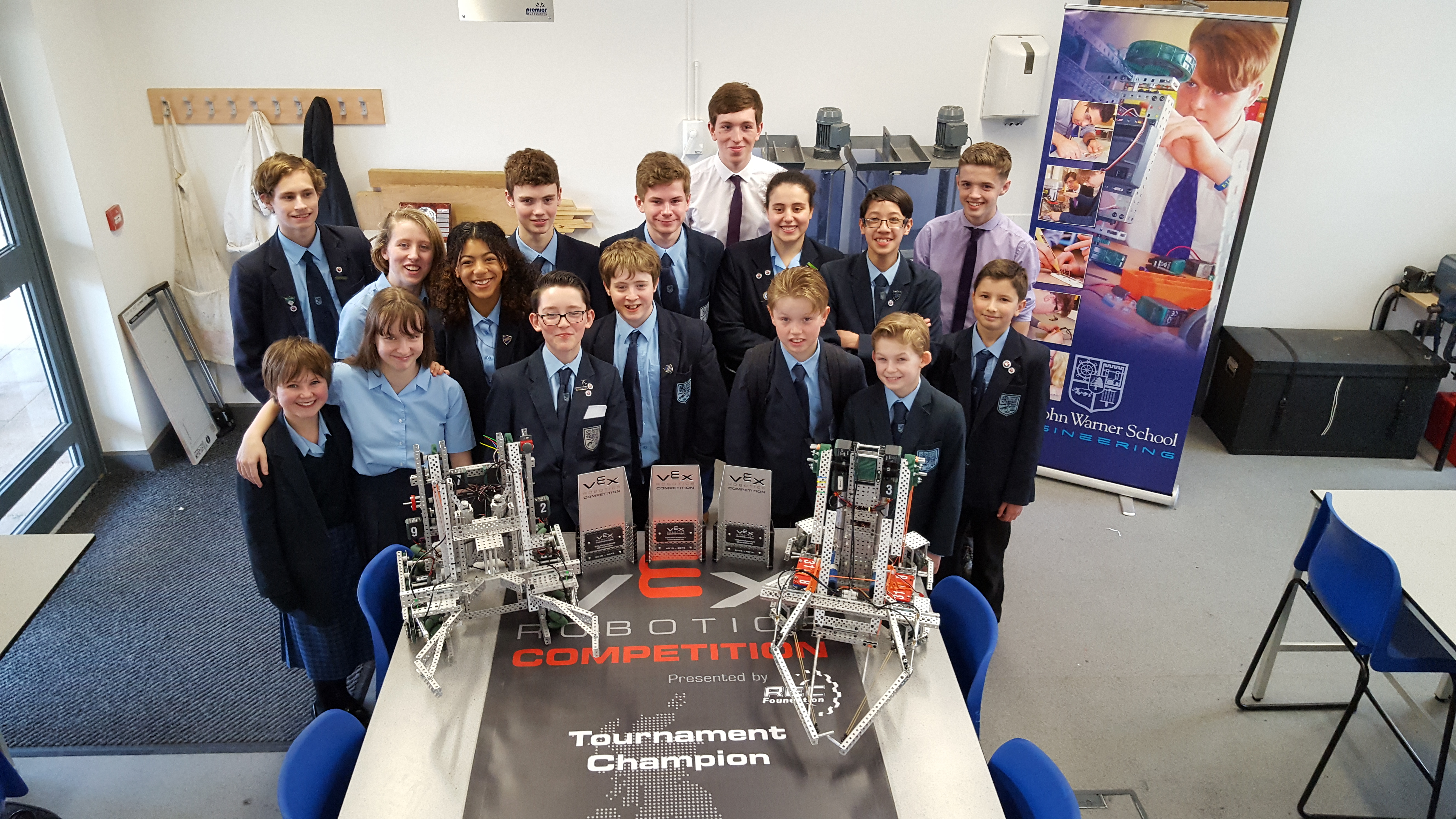 [Show picture list]
Our team for the tournament consisted of four members; Lewis Brooker, Gabriella Mariconda, Enrico Sanzeri and Peter Chapple. Lewis and Gabriella knew the experience of nationals, having won the Innovate Award at the event during last season. However, it was the first nationals appearance for Peter and Enrico.

The team had a positive start to Day 1. We passed inspection on our first attempt and then went on to complete four skills runs – two driver and two programming. Our first driver skills score was 35 points – just 1 point off of our highest score! We then recorded a disappointing programming skills score of four. We opted for a second run straight away, and scored eight points – an acceptable score considering the code was written on the day of the event. We ended Day 1 in second on the skills challenge leaderboard, with an overall score of 43.

Day 2 marked the start of matches for the team. We easily won our practice match 52-0 with 72477A. Our first qualification match also ended in a win – 36-12 with 3116Z after we won autonomous and decided to score SPs for ranking. Our next few matches carried on in the same way – winning autonomous and scoring SP. Halfway through the first day, we were in 1st place – 5-0-0 with 20 AP! Unfortunately, in our 6th match we suffered our first loss of the competition after becoming entangled with our alliance partners and seeing our claw motors become unplugged as a result of this. We were back to winning soon after though, winning 28-14 with 10173W. In our sixth match, we lost autonomous, but still managed to win the match 25-17 with 3116! We were in first place (7-1-0 with 24 AP) heading into our last match of day one against the second place team… In our last match of the day, we were paired with a wallbot who were ranked in last position, against the second place team. We lost autonomous, and the wall had blocked off half of our side of the field. The other alliance kept their stars on that side of the field. We tried everything we could – at one point even reaching through the wall to get to a cube, but we unfortunately lost the match 20-26. We finished the day in second place.

The team had high hopes for Day 3 following a strong showing in Day 2. Unfortunately, in our first match of the day we lost autonomous to a team who was also ranked high in the table after our partners (a pushbot) got in the way of our robot. The rest of the match continued in the same way, and we lost 7-38 – dropping down to 8th place! Fortunately, we won our last three matches – taking the autonomous bonus in each to finish 5th overall in the table.

During our first quarterfinal match, 3117 and 3116A became entangled with each other, which took out the high hangs from both alliances. we were left to play out a 1v1 scenario against 66618Z, and narrowly won the match, 24-17! 3117 and 5194E then won the second match, after 3116A’s claw failed to deploy. Our autonomous didn’t go to plan in our semifinal match against 5194B and 1591B. 3117 dropped all of the stars they picked up, and our robot couldn’t seem to knock anything off of the fence. Soon after the driver control period started though, 5194B tipped after we blocked their scoring of a cube. We were able to come back comfortably from there. We won 55-4. Girls of Steel then helped Shark Robotics to finish the job, winning the second match and taking us to the national final – to face the first seeded alliance of 46644D, 4941A and 3116B. We won the autonomous bonus in our first finals match against 46644D and 4941A, and had a relatively clear field after the autonomous period. The red alliance started to score some objects, but then 46644D collided with us over the fence. 46644D tipped onto their side, but we lost our rubber bands used for grip in the process. This slowed down our scoring significantly and allowed 4941A to make a good comeback. Unfortunately, the 2v1 scenario eventually became too much, and with the help of a high hang, we won our first finals match! The red alliance won the autonomous period in Finals Match 2 – despite 46644D tipping onto their back. They were able to right themselves quickly, but 3116B tipped forward after a collision with 3117. A cube stopped them from righting themselves. The 2v1 scenario quickly became too much for our opponents, and we were crowned the UK National Champions!

There was more success for us after this however, as our LCD Code Chooser and multiple autonomous routines won us the Think Award! We left the venue on the final day with two trophies, a banner and a qualification spot at VEX Worlds, taking our total amount of trophies this season to six!

It’s been a great season for us, and we are looking forward to VEX Worlds, and the new game.