A HERTFORDSHIRE robotics tournament brought together some of the sharpest  robo-minds from schools in the county.The event was held at the John Warner School and students from five school  across the county competed.Four teams from the school have now qualified for the VEX National Robotics  finals with a chance to qualify for the world championship in California.

Not only have they developed and built their own robots but they were also  the driving force behind hosting the event a.

From the outset, the project planning, organising and running of the event  has been student lead and the success of the day was a resounding reflection of  how talented these youngsters are.

Stuart Higham, subject leader for engineering, was proud of the pupils’  efforts.

“I would also like to thank Jenny and Dave Smith for their engineering  support and Phil Mayo of Premier EDA, alongside Barbara Cordina from Broxbourne  U3A, who kindly supported the event and sponsored two awards for the event.

“We are always grateful when members of the community come together to  support the school.

“I am immensely proud of what the students have achieved, their participation  validates all the hard work we have put into making Engineering and Robotics a  success at the school.”

Prof Bernard Barker said: “The event was presented, hosted, organised, judged  and otherwise managed by a remarkable team of students who displayed maturity  and mutual supportiveness beyond their years.

“Everyone present was wholly engrossed in relevant activities throughout the  day, with a gentle buzz of conversation within and between teams as the event  unfolded.” 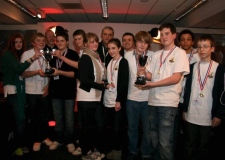 A BOUT of robot wars has seen a Stevenage school emerge victorious in a county-wide event, as expert engineers and an MP watched on.

Marriotts School took the spoils alongside Hoddesdon’s John Warner School as they teamed up to win the fourth Hertfordshire Robot Rumble.

Despite wintery conditions delaying the start time by two hours, over 100 pupils took part in the MBDA-sponsored event following three months of design, development and build work by the teams, with the Stevenage business tech expert Malcolm Rush and Stevenage MP Stephen McPartland dishing out the awards.

A total of 12 two-team robot alliances competed against each other at North Herts College in a series of games involving donut-shaped rings and a knock-out phase to determine the winners, after receiving mentoring from MBDA graduate engineers.

Also among those to impress the judges were The Lost Boys from Stevenage’s Barnwell School, who were given an award for Best Presentation, while Hitchin Girls School picked up the Endeavour accolade.

Speaking after the event, Mr McPartland commended MBDA for its continuing support of industry and education projects and reflected on the growth of the Robot Rumble event over the past three years.